Look! A book review! It’s a very overdue book review – I read See You In The Cosmos so long ago I’ve just had to look up who actually wrote it (Jack Cheng), so I can’t imagine this will be a very detailed review, but to be honest I’m just grateful I seem to have found my blogging motivation again! 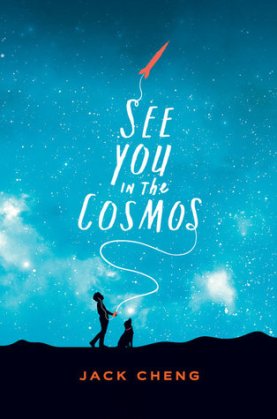 11-year-old Alex Petroski loves space and rockets, his mom, his brother, and his dog Carl Sagan—named for his hero, the real-life astronomer. All he wants is to launch his golden iPod into space the way Carl Sagan (the man, not the dog) launched his Golden Record on the Voyager spacecraft in 1977. From Colorado to New Mexico, Las Vegas to L.A., Alex records a journey on his iPod to show other lifeforms what life on earth, his earth, is like. But his destination keeps changing. And the funny, lost, remarkable people he meets along the way can only partially prepare him for the secrets he’ll uncover—from the truth about his long-dead dad to the fact that, for a kid with a troubled mom and a mostly not-around brother, he has way more family than he ever knew.

I really wasn’t sure what I was going to make of See You In The Cosmos but I really enjoyed it. I’m not sure it’s terribly realistic – Alex manages to travel across the USA with very little interference, and it’s actually kind of worrying that he manages it – but he’s a great character, and the people he meets along the way acknowledge that in various ways. I’m not afraid to admit that I cried more than once reading it.

I also really liked the structure of the book – Alex is talking into his ipod to make a recording to send to space, in the hope that alien lifeforms find it and listen to it. Alex’s enthusiasm is infectious, and I think the idea of the recording brings us closer to him. Equally, his sadness seems very real, and I remember feeling very dejected, as Alex did, at certain points in the story. As an adult, I was also horrified at Alex’s backstory – he’s essentially been looking after himself for a year at the point the story begins, and that just made my heart ache.

I’m really glad this came up as a read now on Netgalley, because I’m not sure it’s a book I would have come across otherwise, and I’d have missed out. It is a MG book, but probably for the upper end of the age range, and if you know anyone who’s obssessed this space, I think they would get on very well with Alex. See You In The Cosmos is definitely well worth a read.

ARC received from Puffin Books via Netgalley in exchange for an honest review.