I really wish life would stop getting in the way of my blogging! I was away with work last week, and unfortunately working well into the night, so any blogging went right out of the window. Luckily, I had taken The Fallen Children, by David Owen, with me, and this was a great decision because the book is brilliant. A modern retelling of John Wyndham’s The Midwich Cuckoos, set in an inner city tower block and told from the point of view of the young women impregnated, The Fallen Children was everything I wanted it to be. 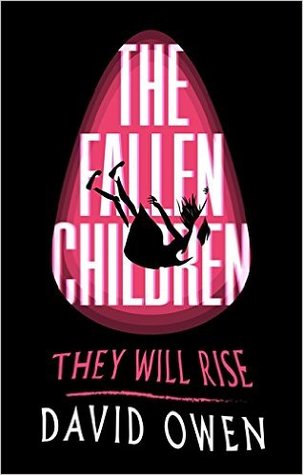 Young people on the Midwich Estate don’t have much hope for their futures. Keisha has lived there her whole life, and has been working hard to escape it; others have just accepted their lot.

But change is coming…

One night everyone inside Midwich Tower falls mysteriously unconscious in one inexplicable ‘Nightout’. No one can explain what happened during those lost hours, but soon afterwards Keisha and three other girls find they’re pregnant – and the babies are growing at an alarming rate.

As the news spreads around the tower its residents turn against them and the situation spirals toward violence. Keisha’s life unravels as she realises that the pregnancy may not have just ruined her hopes for the future: she might be mother to the end of the world.

The Fallen Children is a story of violation, of judgment and of young people who must fight to defy what is expected of them.

First of all, because I know lots of you are as shallow as me when it comes to covers, there are 360 different shades of covers available. 360! God help the completists out there! But the covers are gorgeous, and so I forgive whoever came up with the idea at Atom Books. (I got number 60, which is a lovely purple cover.)

Shallowness over, onto the actual book. There are four point of view characters – three of them are the young women who found themselves pregnant after the Nightout, Keisha, Siobhan and Maida (there’s a fourth, Olivia, but we don’t get to see her pov), and the other is Morris, Keisha’s ex-boyfriend who proves to be more of a support than she could ever have expected, while also quite often being a terrible person. I liked him a lot as a character because of this – he knows he’s screwed up, multiple times, but he just keeps making mistakes, and he sees Keisha’s pregnancy as a chance to make things right – but much less as a person. I liked the different point of view chapters because it was incredibly interesting to see inside the character’s minds, and look at how they’re dealing with this terrible thing that has happened. Keisha and Siobhan feel violated, and neither of them want the babies growing at an astounding rate inside them, but Maida feels that her pregnancy gives her power and a purpose, and she is determined to do right by her child.

I loved the sci-fi/supernatural parts of the plot, but what I loved most was the way it shone a light on problems in our society, as all good sci-fi should do. The expectations of society for our teenagers, both positive and negative, teen pregnancy and slut-shaming, the way women who have been raped are so often not believed, the way we as a society too often abandon others. Keisha has worked hard to turn her life around after nearly being expelled, but as soon as people find out she is pregnant, she is abandoned and shamed. No-one bothers to find out how she’s feeling, no-one gives her the support she needs to get through this, other than those who have found themselves in the same position. Once the rumours start flying, she’s treated with suspicion, especially once it’s clear that her baby is growing much faster than it should be. Even her parents don’t really know what’s going on, and don’t really make any effort to find out – they’re all too willing to believe that Keisha has thrown her future away. The way the rest of the estate turns against Keisha, Siobhan, Maida and Olivia so quickly is genuinely frightening, because it’s so realistic.

Keisha was my favourite character, but my heart broke for Siobhan in so many ways. I felt a little less connected to Maida and Morris, but I thought they were all written brilliantly. I also really liked the way the characters we meet in the second half of the story were written, especially how we saw them develop. I also liked that all the characters had well developed families, and the background of those families made the actions of the main characters make perfect sense.

I really haven’t done The Fallen Children any justice at all this review. I’m so out of practice! My advice is to just read it. You don’t need any knowledge of John Wyndham’s original (although I highly recommend you go and read some of his books if you haven’t already, because you are missing out!), and this version of the story is a masterful retelling. I’m off to buy Owen’s first book, Panther, but leave me a comment and let me know what you think if you’ve read The Fallen Children!

One thought on “Book Review: The Fallen Children”