Today I am thrilled to sharing my review of Smoke In The Glass, by Chris Humphreys, as part of the blog tour. Huge thanks go to Stevie at Gollancz, for the opportunity and my gifted copy of the book! 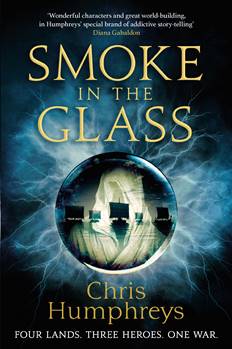 In Corinthium a decadent  endlessly-lived elite run the world for profit and power. But when a  poor, honest solider dies, and is reborn, everything changes.

In wintry  Midgarth, where immortals are revered as deities, one of them has realized that something – or someone – is killing the gods.

And in Ometepe there is only one immortal, for he has murdered every other. Until one woman gives birth to a very special baby.

Yet there is a fourth, hidden land, where savage tribes have united  under the prophecy of ‘the One’: a child who is neither boy nor girl.  Now they plan to conquer the world. Unless a broken soldier, a desperate  mother and a crippled god can stop them…

So I’m not going to lie to you, I was wary when I saw the blurb for Smoke In The Glass. “Savage” tribes and an intersex baby? So much potential for fail. But actually, I was pleasantly surprised. There are some derogatory terms used, so you might want to be careful when reading, but they’re generally from characters who are supposed to be “bad”, and they’re challenged by other characters. It is something to be aware of though.

The point of view is split between the three lands (none of which know of the existence of the others), with the occasional interlude from the fourth. Our main characters are Ferros from Corinthium, the land where immortals represent the elite and the rich, Luck from Midgarth, a land which bears a strong resemblance to Scandinavia and where immortals are seen as gods, and Atisha from Ometepe, where there is only one immortal who is worhsipped as a god. Ferros and Luck are immortals themselves, and Atisha is the former consort of immortal Intitepe, abandoned and sent to the City of Women after becoming pregnant. Each point of view offers something different for the story – Ferros is finding his feet as an immortal, whereas Luck is already hundreds of years old, and Atisha provides the non-immortal point of view. We also hear from Lara, Ferros’s lover, who is disappointed with the change she sees in Ferros.

Luck was by far my favourite character. I enjoyed the Norse-like setting of Midgarth, and the constant battling of Luck’s village with their neighbours. It’s also the land where we find out much of the detail of the plot, which I think helps you to like it. Luck is also the brains of the story – he’s the one who notices something weird going on and investigates it, he’s the one who takes the initiative to travel across the land, he’s the one who persuades his fellow gods to unite Midgarth so they are better able to face whatever’s coming.

That’s not to say that I didn’t enjoy Ferros’s and Atisha’s parts of the story, because I did. I particularly enjoyed Atisha’s time in the City of Women, among other women who had been in her situation, and the support some of them gave her. I don’t want to spoil it for you, but there are some great humorous scenes here, as well as a rollicking action sequence. Ferros is a little bit harder to talk about. The book begins with him, and I thought I was really going to love him, but his story actually got a little bit boring to be honest. He seems to spend a lot of time not learning anything, and while it’s true he’s being manipulated by other immortals, he started off seeming much cleverer than he ended up being. I felt very sorry for Lara, who’d given up everything to be with him. However, despite that, there were moments in this strand of story that I found very interesting, and I’m looking forward to seeing where it goes from here.

Smoke In The Glass has to do a lot of work in setting up the world, and Humphreys does a great job here. I love the information we get about where immortality comes from – it’s different in each land – and how each land is completely separate from the others. Ferros and Lara give us the perfect opportunity to see Corinthium from an outsider’s point of view, and because Luck is essentially the history keeper of Midgarth, he can provide lots of interesting tidbits through explaining them to the other gods. I also really liked the idea that there’s no way to tell if you’re immortal unless you die. Each main character is surrounded by a bevy of interesting supporting characters – again, Luck’s fellow gods are my favourites, mostly because they actually listen to him and work hard to make sure his plans succeed, although I did love Atisha’s older companions in the City of Women.

Humphreys has a fairly traditional style of writing which might not be for everyone. As someone who grew up on traditional fantasy, this didn’t bother me at all, but Smoke In The Glass is quite slow-paced and doesn’t reveal its secrets easily. It’s also very much the first book in a series, designed to bring all our protagonists together, and it ends on something of a cliffhanger. I’m intrigued to see what happens next – it’s clear we’re going to get more information from the fourth land and I think that will be fascinating – so I’m really looking forward to book 2. If you’re looking for a new dark fantasy series, I don’t think you’re going to go wrong with Smoke In The Glass.

Smoke In The Glass is out now from Gollancz. Don’t forget to check out the other stops on the blog tour!